On the subject of one more anniversary of Peru: are indigenous peoples part of the nation? - CEDIA 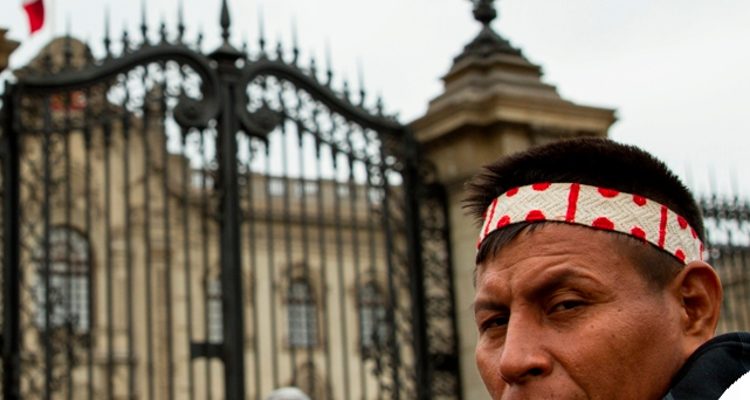 By: Eddy Mejía and Dani Rivera

This July 28, in Peru we celebrate 196 years of having become an independent and sovereign State. With only four years to celebrate the bicentennial of our independence, let us take the opportunity to take a thoughtful look at the place of indigenous populations, especially the Amazon, in the work of Peru as a Nation State.

The role of indigenous peoples in Peru has been a topic of discussion since the arrival of Spanish soldiers in the "Conquest of America." For centuries, this discussion was centered on its importance as a workforce and even on its status as inheritable property. Despite the "New Laws" of the Viceroyalty that prohibited their slavery, possession or dominion, it was not until the first half of the twentieth century, after more than a century of Republican life, that the 1933 Constitution considered the recognition of their legal existence and it is exhorted to guarantee the ownership of their lands or to provide them to those who do not have it. However, as mentioned by Lelis Rivera, Executive Director of CEDIA, on this point, “… All of this referred to the indigenous inhabitants of the Andean rural areas that make up the so-called peasant communities; but not, to those who were part of the ethnic groups of the jungle, which at that time were called "aboriginal groups or tribes of the Peruvian jungle"

Whether due to its remoteness from the capital and large cities, its low population density or its apparent low productivity, the Amazon region and with it its populations have historically been forgotten, even when it comes to legislating. These "aboriginal groups" of the Peruvian jungle have been left behind, tacitly becoming the prey of the rubber tappers, the responsibility of the missions and the problem of the settlers. It was not until after a century and a half of Independent life and after various movements for the vindication of these indigenous peoples that, in 1974, the Peruvian State promulgated the first Law that recognizes the legal personality and ownership of the lands of the called tribes. With this Law, promulgated five years after the Agrarian Reform Law, the formerly called tribes are now called native communities, making a similarity with the original populations in the Andean areas. Decree Law 20653, which recognizes the property rights of these peoples, established the non-seizure, imprescriptibility and inalienability of the communal lands, guaranteeing the integrity of the communal territories delivered under the legal figure of titling. This law also gave them powers to resolve minor litigation issues that originate within the communities.

As expected, the promulgation of this Law initiated a first wave of territorial claims in favor of the Amazonian indigenous populations. The State itself, through the Ministry of Agriculture, was in charge of the identification, characterization and granting of property titles to these new Native Communities. This momentum diminished as the government's orientation shifted towards greater concern for the defense of the nation's economic interests. On May 13, 1975, DL 21147 Forestry and Wild Fauna Law was promulgated, in order to regulate the use of forest and wildlife resources, resources that are found in many cases on the titled lands of native communities. .

Subsequently, in 1978, DL 22175, Law of Native Communities and Development of the Jungle and Ceja de Jungle, was promulgated, by which it is established, among other aspects, that the territory demarcated to be handed over to the native communities is it will do under the titling figures only those areas that are classified as lands suitable for agricultural and grazing use. The rest of the demarcated area, zones classified as forests or protection zones, are delivered through the issuance of an Assignment Contract in Use. This Law, which governs the titling processes until now, completely changes the spirit of the recognition of the right to property of native peoples, making them users of natural resources in most of what they consider their territory.

To understand the true scope of this law, it is important to remember that the aptitude of the land in the Amazon is not agricultural, and that, in response to that reality, historically, the practices of the native populations of the jungle are based on land use. sustainable forest resources. Consequently, the property rights of native communities can only be exercised in practice, in a small fraction of what they consider their territory, in the rest, they are users of the resources authorized by an assignment contract in use.

This initial wave of hope that occurred in the mid-1970s tended to gradually wane. As a consequence of the adoption of regulations that created legal loopholes and made the process for the physical and legal sanitation of indigenous territories in the Amazon more complex, these were practically paralyzed since the beginning of the 21st century. At present, we are experiencing what could be considered a second wave of physical and legal sanitation of native communities, driven by the impulse of international cooperation. Paradoxically, this new wave is not driven by a sense of justice and vindication, but by the understanding on the part of the Peruvian state and the rest of the world, of the role that indigenous populations play in the conservation and management of natural resources. Peru's commitments in the framework of agreements against climate change and other bilateral commitments are the ones that move this second wave, although for indigenous peoples and their organizations it continues to have a more intimate and vindictive sense.

Almost 200 years after our existence as a republic, we are advancing very slowly, on the way to integrate the indigenous populations into the great nation. Although in this essay, we have only superficially covered one of the dimensions of this integration: the legal recognition of these peoples and their right to land ownership. We have other debts with them such as health, education, recognition and respect for interculturality, among many others. As the great Peruvian Cesar Vallejo wrote in his poem The Nine Monsters, “… there are a lot of brothers to do”.

The term nation is defined by historian Benedict Anderson as: “A political community imagined as inherently limited and sovereign.
It is imagined (because its members) will never know the majority (…), but in the mind of each one lives the image of their communion.
It imagines itself limited because even the largest of them (…) have finite borders (…) beyond which other nations are.
She imagines herself sovereign because the concept was born at a time when the Enlightenment and the Revolution were destroying the legitimacy of the hierarchical dynastic kingdom (…) nations dream of being free (…). The guarantee and the emblem of this freedom is the sovereign State.
Finally, it is imagined as a community because, regardless of the inequality and exploitation that may prevail, the nation is always conceived as a deep, horizontal partnership. "

1 Laws and ordinances again made by His Majesty for the government of the Indies and good treatment and conservation of the Indians. 1542

2 Chuecas Cabrera, Adda. The Right of Indigenous Peoples and Communities in the Historical Context of Peru. Pg. 7.

5 For the indigenous populations of the Amazon that seek recognition as native communities "there is no" this classification, they ask for the "titling of their territory."