The situation in the Apurímac River Valley (VRA) is worrying. The sale of wood and non-traditional crops has focused the work of the native communities only on commercial crops, despite reducing the size of their farm that they use for family consumption. These practices have also reduced the diversity of traditionally harvested products. Added to this situation is the dramatic decline in aquatic fauna due to the pressure of fishing that the Apurímac River and its main tributaries are subjected to. This also occurs due to the growth in demand from cities that are located on its margins such as Santa Rosa, Palma Pampa, Kimbiri, Pichari, Puerto Coco, among others.

We observe that the cultivation of the coca leaf in the VRA continues to increase. The residues of the drug production process reach the waters of the Apurímac River. In addition, the lands occupied by the Asháninkas and Machiguengas indigenous peoples have been invaded by settlers [1] who cultivate coca in the sight and patience of the state authorities. This happens both in titled territories and those that are in titling processes.

According to the Coca cultivation Monitoring Report carried out by the UNOC (United Nations Office against Drugs and Crime) and DEVIDA (National Commission for Development and Life without Drugs), between 2017 and December 2018, the coca cultivation in the territories of native communities in 22%, compared to 2016; In other words, from 2,752 ha, these have increased to 3,366 ha, of which 1,382 ha (41%) are within the scope of the VRAEM. Statistics indicate that the native communities also cultivate coca, it is true; However, this activity is mostly carried out by invading settlers in communal territories, using the following identified modalities:

Native communities titled until the year 2000 that carried out their territorial demarcation process with low-precision traditional surveying equipment (without UTM coordinates) have been invaded. This situation has been capitalized on by neighboring settlers who have systematically invaded communal territories. When indigenous people try to assert their rights, they immediately intimidate their leaders by criminally denouncing them. On occasions, this situation has been brought before the courts. Unfortunately, the authorities who must administer justice end up agreeing with the settlers, which is why they continue to gain communal territory to plant the coca leaf. Among the native communities affected under this modality are Kipachiari, Greater Shinungari, Cashiruvine and Capirushiato.

Native communities that extract wood they invite legal and illegal loggers to their territory. The former are authorized by the Forest and Wildlife Service (SERFOR), a competent authority. The illegals, in Pichari, travel the entire territory, opening access trails so that, once the extraction is finished, they rent land for the planting of coca for a period of 2 to 3 years. When the community wants to evict them, they do not want to withdraw and continue to expand their borders to plant coca within the communal territory. Under this system, the native communities affected are: Catungo Kempiri, Sankiroshi, Tiñovancani, Comitarinkani and Pitirinquini.

Native communities that assimilated settlers into the communityIn other words, the settlers became part of the community under conditions imposed by the population and are now part of it. However, the descendants and relatives of these settlers have been taking the political and administrative power of the community to restructure the communal experience, replacing it with their own habits and customs, even in the distribution of the territory. Thus, they systematically displace the indigenous people and take the best land to plant the coca leaf. Among the native communities affected under this modality we have Limatambo, Pitirinquini and Gran Shinungari.

MODALITY 2. INVASION IN TERRITORIES IN THE TITLING PROCESS:

It is important to highlight the case of the Shimashirinkani Native Community, located between the native communities of Paveni, Pitirinquini and the Asháninka Communal Reserve (RCA). This community has been suffering this form of invasion; However, Shimashirinkani has a strength: it has the support of the Apurímac River Asháninka Machiguenga Organization (OARA).

Members of the Shimashirinkani Native Community.

The invasion process of their territory began in September 2018 with the opening of trails within the community's territory. The head of the community warned the invaders and requested their peaceful withdrawal; however, they continued with their purpose, claiming that they were on freely available land. In November of the same year, they rubbed approximately 6 ha, of which 1 ha is within the Asháninka Communal Reserve (RCA), despite the fact that the area is legally protected by the Peruvian State. In view of what happened, the community members asked the invaders, for the second time, to withdraw; however, these continued.

Faced with this, Shimashirinkani made formal complaints to institutions such as SERNANP Satipo, SERFOR Pichari, Agrarian Agency - Regional Directorate Aagraria Cusco, Environmental Assessment and Enforcement Agency (OEFA), Specialized Environmental Prosecutor (FEMA) San Francisco, Special Command of the Valley of the Apurímac, Ene and Mantaro rivers (CE-VRAEM), the Justice of the Peace and before the mayors of the nearest populated centers. They also tried to report to the National Police of Peru (PNP), but they were not even received.

Only FEMA notified them that they would carry out a field inspection by December 27, 2018. On that day, no representative approached the area and to date, there has not been any pronouncement in this regard. This has caused the invaders to continue taking possession of the communal territories. 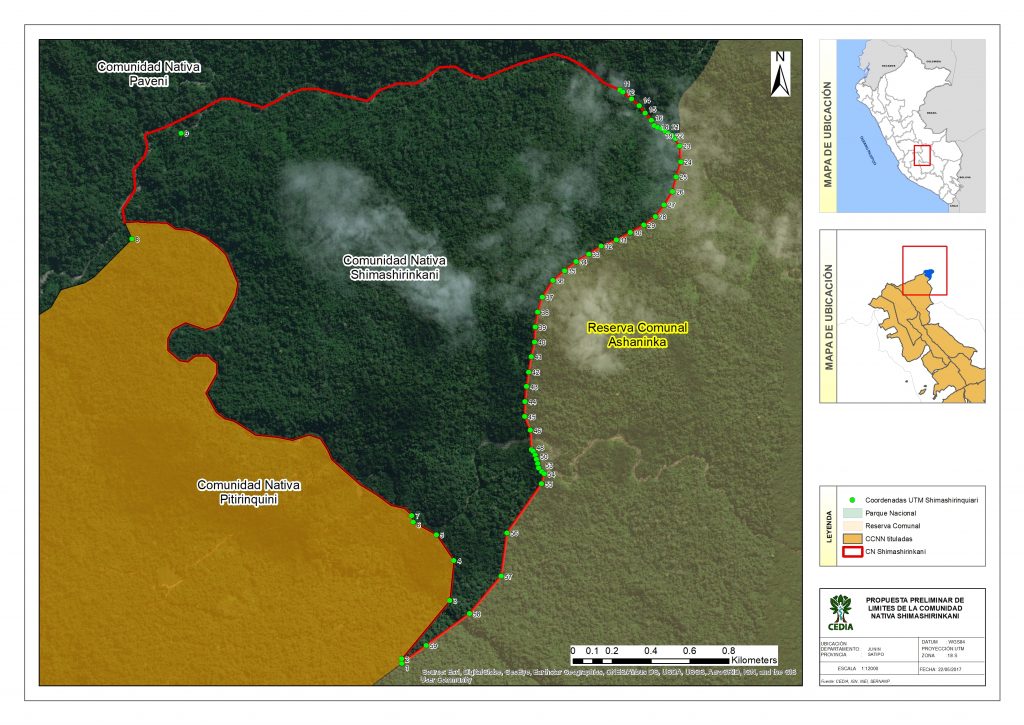 The state institutions have within their functions to enforce the rights of indigenous peoples; however, this is not the case. This facilitates the creation of social conflicts between settlers and indigenous people.

Faced with the illegal activity of coca cultivation in the native communities of the Apurímac basin, we alert the pertinent authorities to take action on the matter. The Organization Asháninka Machiguenga del Río Apurímac (OARA) has been making a valuable effort to put an end to this situation, but any initiative will be sterile if it does not have the support of local, regional and national authorities that have competence in the zone. For this reason, OARA is willing to carry out the necessary coordination to prevent this situation from continuing to harm more communal territories.

[1] Mestizos from the Andean area.

[2] Although Shimashirinkani is part of the goal of the PTRT3 Project, to date it has no results on the legal physical sanitation of its territory.