The first week of March, the news was confirmed regarding the intention of the Canadian company Pacific E&P to withdraw from lot 135. A simple glance showed us that this lot is overlapped with three types of spaces with different regulations regarding its use. In the first instance is the Matsés Native Community, which was reluctant to hydrocarbon activity in its territory from the beginning. The second case is of two Protected Natural Areas (ANP), which are the Matsés National Reserve and the Sierra del Divisor National Park; and finally it is also overlapped with two proposals for Indigenous Reserves: Yavari Tapiche and Sierra del Divisor Occidental.

This constant overlapping of rights is a continuum in the Peruvian Amazon and responds to a lack of planning and knowledge of the territory, with a state policy of an extractive nature that prioritizes these ends over the rights of indigenous peoples and violates spaces, which the State itself has chosen to retain permanently.

Although this whimsical granting of rights in many cases generates conflict, it also shows the complementarity of other legal figures such as ANPs, Indigenous Reserves and native communities, in the case of overlap or border; as long as they are seen from a perspective of complementarity and mutualism before thinking of them as opposing instances in their objectives.

What do ANPs and IRs have in common?
There are some factors that can explain the close relationship between the ANPs and the presence of Indigenous Peoples in Isolation (PIA) and we will list some below:
- Geographically quite inaccessible spaces
- Good state of conservation of the forest and its resources
- Places less affected by extractive activities.
- The social function of the PIA as “Guardians” of the forest. It is known that the presence of these peoples for the neighboring populations has generated social and imaginary borders, either through prejudice or by being an informed population that does not seek to violate the integrity of these peoples.
- The existence of native communities in neighboring or peripheral spaces.
- The integrity of the ANP guarantees the territory where these populations live. The long existence of Protected Natural Areas (some more than 40 years) with the highest category of protection and intangibility has generated that some segments of the forest serve as refuges for these peoples.
To begin the analysis we know that all Indigenous Reserves, Territorial Reserves or Proposed Indigenous Reserves are territorially linked to an ANP either by overlapping or by being adjacent, but within a continuous territorial space, forming a kind of conservation blocks. Next, we will review the existing cases.
The ANPs in the southern jungle, the complex of ANPs in Cuzco and Madre de Dios: RC Purús, PN Alto Purús, PN Manu, SN Megantoni, RC Amarakaeri are directly linked with the Territorial Reserves Mashco Piro, RT Kugapakori, Nahua, Nanti , RT Murunahua, and RT Madre de Dios (transitory category). This would be an example of what we refer to with the idea of continuous conservation spaces. 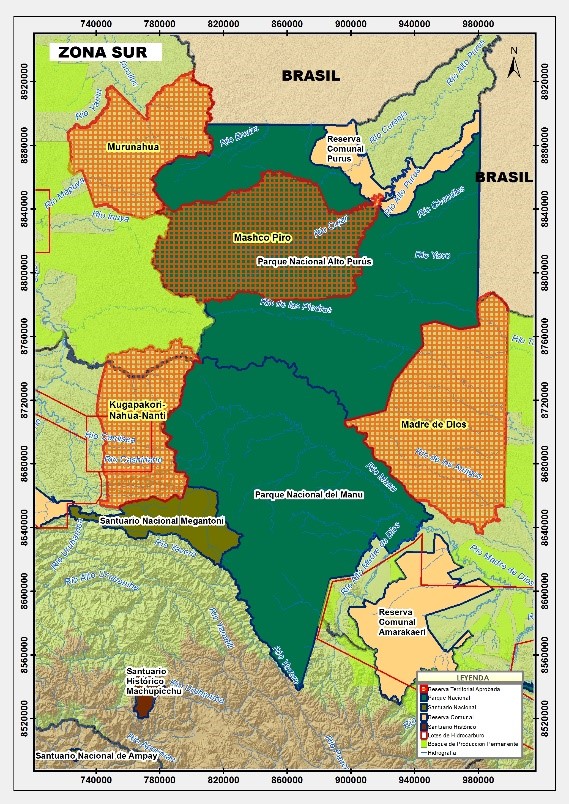 Likewise, in the northern jungle there is a similar situation but in a more fragile condition; and even more so in the current context. The complex created by the PN Sierra del Divisor, the RN Matses, the CN Matses, the ACR Tamshiyacu Tahuayo; they maintain a very strong link with the RI Isconahua, and the proposals of RI Yavar Tapiche, Sierra del Divisor Occidental (Capanahua) and the proposal of RI Yavari Mirin. Further south we can also find the clear link between the Cordillera Azul NP and the recently recognized RI Cacataibo proposal. 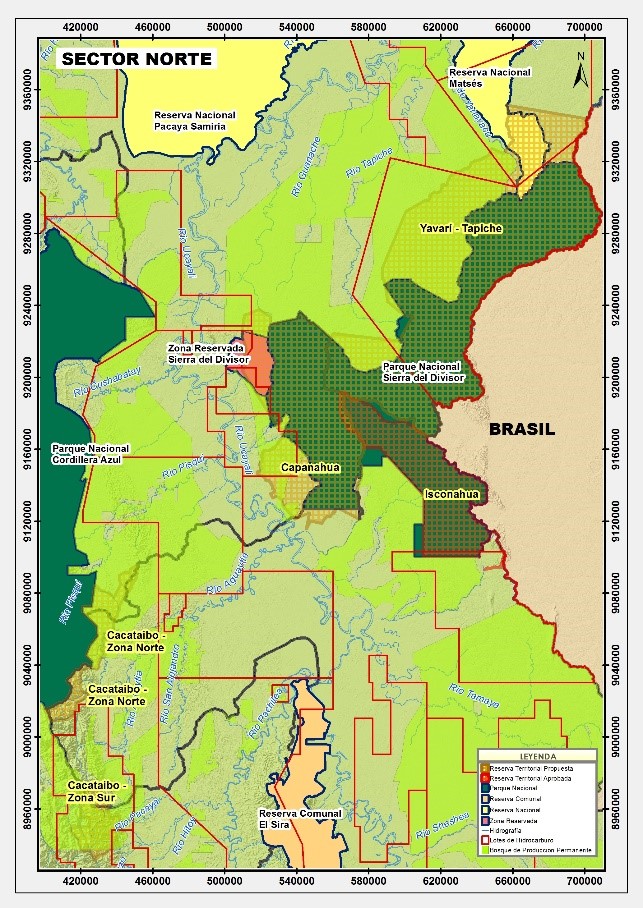 How are these areas managed and articulated?

The different management characteristics in both spaces show us the pros and cons in the case of overlap, as well as the weaknesses in case of understanding them independently.

One of the main favorable aspects in cases of overlap is the double layer of protection that these spaces acquire, strengthening their legal security. Thus we can also see that there are processes of articulation of activities and management instruments between the National Service of Protected Natural Areas and the Vice Ministry of Interculturality within the framework of formal agreements.

Another aspect of interest is that there is no type of incompatibility with respect to the objects of conservation or protection of both instances; and in the case of the ANPs, the buffer zones regulated with respect to their uses, function as spaces for the prevention and containment of threats, something very positive in case of overlap. Unfortunately, this prevention space does not exist in the case of IR, when viewed independently.
Regarding this overlap or link, we must first understand some basic concepts, such as which state agencies are in charge of the management and administration of these spaces.

In the case of ANPs, the competent entity for their management is the National Service of Protected Natural Areas, dependent on the Ministry of the Environment, which has its own specialized law and regulations and with distinctive criteria for each of the different types of ANPs. .

Protected natural areas also have specific and detailed Management instruments; as well as planning and evaluation instruments suitable for each area with a variety of technical tools. There are specific and decentralized procedures, where each area has headquarters, specialists and park rangers. Although not everything is rosy, it has more effective legal and operational mechanisms than its counterpart linked to the protection of Indigenous Peoples in Isolation.

On the other hand, we have the entity in charge of the protection and safeguarding of the rights of indigenous peoples in voluntary isolation, the Vice Ministry of Interculturality, dependent on the Ministry of Culture.

The specialization of the norm and its regulation is relatively recent, so to date there are delays for its full implementation. Regarding the management instruments and tools for their implementation, the updating processes have not yet been completed, but the Protection plans and some other protocols for the prevention of violations of the rights of the PIA are known by regulations. Protection agents are in charge of their control and care, and these areas have a series of cross-sectoral devices to reinforce their protection.

This shows that there are some limitations to the management of these areas that must be taken into consideration.

Normatively, we find, for example, that the authority over Indigenous Reserves is held by the VMI, so that in the event of an IR over an ANP, the operation of actions in the field, call it patrols, for example, is restricted to personnel from ANP, since it is prohibited or is conditioned to the authorization of the governing body, from Lima, as there are no decentralized instances by the VMI for these situations.

Regarding operation, we see that there is no training process for park rangers and protection agents that contextualizes them in the regulation of both spaces, considering the management instruments of each instance, as well as the tools and mechanisms. In the same way, tools have not been built articulated by both entities from the inputs of each one, which consider the reality of the field in an integral way.

The overlapping of attributions can also generate duplication of efforts when not working in an articulated manner. The articulation of strategies and a consensual work should lead to a cost efficient management.

The participation of the neighboring population, as well as the involvement of other actors from the public and private sectors, indigenous organizations, and civil society in existing instances such as Management Committees, or multisectoral commissions, PIACI tables, could be a way to strengthen or at least map and monitor the activities of the actors, generating strategies to mitigate impacts.

Although not all ANPs are linked to RI, if all RIs are linked to ANPs, but not throughout their perimeter; which does not harmonize protection criteria in its entirety, leaving areas more fragile and susceptible to threats.
The existing threats to both spaces are enhanced when we understand these areas independently, when they are actually part of a territorial block of refuge for biodiversity and indigenous peoples in isolation built both legally and historically in a specific cultural and geographical context that makes them indivisible.
If we see the series of rights that the State seeks to grant over the spaces that we have been reviewing, we realize the high vulnerability of these spaces. Add to this the invisible illegal activities that exert immense pressure on these spaces directly and indirectly.
Continuing with this exercise, let us add the non-existent planning on these areas, as well as the inaction of the State in the normative aspect, the corruption and the disinterest of the regions, the lack of a territorial ordering for the riverside populations and the native communities; and we have as a conclusion a disaster of the system against nature and man, in no way preventable but on the contrary planned.

Alternatives to consider
Seeking to sincere the intention of protecting the ANPs and the Indigenous Reserves as entities connected by an evident mutualism, we can suggest alternatives to consider, after having reviewed some of their positive characteristics and those pending improvement from the normative and practical aspect; with the audacity to propose the possibility of integrated spaces, without threats promoted by the State itself, with a higher level of intangibility seen from a logic of participation and territorial ordering for the neighboring populations, whether native or riverine.
We present them below:
- Maintain the mixed protection system for PIAs and ANPs, considering regulatory and management problems between their governing bodies SERNANP and the VMI.
- Propose a decentralized intermediate management space between the governing bodies, linking conservation interests with those of protection of the rights of PPII, with agreed procedures, participatory management instruments, and defined regulatory mechanisms, thinking of a comprehensive space, without division between nature and man.
- Consider the creation of a category of protection of greater intangibility, such as a "Sanctuary of Life" where the relevance of the natural and cultural component of said space is considered, consolidating a block of protection and conservation giving an integral meaning to said area, eradicating extractive threats that violate its aims or objectives.
From April 26 to May 1 of this year we have participated in the VIII Panamazonic Social Forum in the city of Tarapoto, a space to rethink the development perspectives of the Amazon in a comprehensive sense, where the voice of indigenous peoples regarding what they want for their territory and for their life is heard; and where it seeks to articulate these voices and perspectives to change processes that focus their development on respect for humanity and nature. With renewed energies and commitments, we see the need to generate proposals and debates on the lacking measures available for the protection of two elements long forgotten by our system and our states: nature and indigenous peoples.