The condemnation of Asháninka and Machiguenga child malnutrition in the Apurímac River Valley: a proposal for food sovereignty - CEDIA

Food sovereignty is the right of the peoples to the use and consumption of nutritious, culturally adequate, accessible food, produced in a sustainable and ecological way; allows them to decide their own food and production system, with a safe and nutritionally convenient food supply, which may be sufficient over time.

However, at present, according to the local statistical report of the Ministry of Development and Social Inclusion (MIDIS), the Childhood Chronic Malnutrition Index (DCI); It is due to the 40% of the child population, that is, 4 out of 10 children are malnourished and anemic in the Apurímac River Valley (VRA), attributing this situation to the Asháninka and Machiguenga population. Among the causes we find:

1. The Amazonian population had abundant natural resources that, throughout its evolutionary process, knew how to take advantage of it sustainably for its benefit, surviving from hunting, fishing and gathering wild fruits. Over the centuries, the need to settle in a place and supplement their diet led these settlers to start a self-consumption agriculture, generally cutting down small portions of forest to implement some crops.

Later, with the exponential increase of the population in the area due to colonic invasion, they changed from a subsistence agriculture of vegetable sources, roots, fruits and seeds; to one of commercial crops such as coffee, cocoa, annatto, pineapple, citrus, coca, etc., becoming dependent on products from local and regional markets, neglecting their ancestral crops and their food sovereignty. In addition, these commercial products have a high price fluctuation and due to their low income, they cannot always secure their livelihood.

2. During the 1980s, even the Asháninka and Machiguenga supplemented their diet with fishing from the Apurímac rivers and tributaries; especially during the “mijano” season, when fish from deep rivers migrated to the higher parts to spawn. The fish provided a lot of protein of animal origin to the settlers who fished collectively -in family clans-, but at present, these ancestral practices no longer exist, the fish have decreased dramatically, mainly due to pollution by the excessive use of pesticides in coca cultivation, chemical residues from maceration dumped directly into the streams in the manufacturing process of Basic Cocaine Paste (PBC); and, by the sewage discharged without any treatment, coming from the populated centers and cities settled along the Apurímac river and tributaries.

The consequences of insufficient and inadequate nutrition during the first thousand days of the newborn are devastating and in many cases irreversible, as it slows down the normal cognitive and physical development (brain formation) of children; weakens your immune system decreases cognitive ability that will make it difficult to understand and learn, among other consequences.

Due to the aforementioned causes, the Apurímac River Asháninka and Machiguenga Organization (OARA), which defends the interests of 29 native communities of the Apurímac River Valley (VRA) with the technical support of the Center for the Development of the Amazonian Indigenous (CEDIA) and Within the framework of an initiative financed by FEDEVACO, through Nouvelle Planete, they have undertaken a struggle to reduce chronic malnutrition, through the project "Landscape Restoration and Food Sovereignty in the Ashaninka and Machiguenga Native Communities of the Apurímac River Valley" - REVIEW.

The REPASA project, which began in November 2015 and will culminate at the end of October 2018, has achieved the installation of a total of 44 family ponds in eight native communities: (2) Acompi Capashiari, (2) Camavenia, (4) Yevanashi , (5) Otari, (6) Great Shinungari, (9) Sankiroshi and (16) Sampantuari, to handle mainly species such as the “paco” (Colossoma macropomum), "Boquichico" (Prochilodus nigricans) and "carp" (Cyprinus carpio).

Another important achievement of the project is the implementation of 42 integral family farms in six native communities: (3) Camavenia, (6) Marontoari, (5) Monkirenshi, (2) Sankirosi, (11) Kirushariato and (15) Sampantuari; In this way, the provision of important sources of protein and other necessary elements in the daily diet is ensured, coming from very common food species more than 40 years ago and now present in the family farms of the Ashaninka and Machiguenga.

Indigenous technicians have identified seeds and rescued plant sources such as roots and fruits of ancestral crops. Gradually, these have been distributed among families interested in planting and consuming them. In addition, it has been possible to establish a dynamic of seed exchange that has made it possible to put these food species in the diet of beneficiary families, which are unknown to the market and in several cases, to science.

Thus, to learn more about them and especially their nutritional contribution to the diet of indigenous peoples, botanical identifications have been made of the first five rescued plant species. The taxonomic identification of these was made at the Missouri Botanical Garden:

Once the plant species were identified, they were subjected to a bromatological analysis, to know the contribution of each of these products, we compared this with other better known foods and the result was the following:

If we consider the values expressed in the table and analyze other virtues of the plants that present additional potentialities for the sustainability of agriculture, we can reach the following preliminary conclusions:

The Poy (Pachyrhizus tuberosus (Lam.) Spreng.) and the purple Sachapapa (Dioscorea trifida), contain a good percentage of vegetable protein, 2 to 3 times more than sweet potato (Ipomoea batata), cassava (Manihot esculenta Crantz), and the potato (Solanum tuberosum). In addition, Poy being a nitrogen-fixing legume and having high contents of “rotenone” in the seeds, it is an interesting option to be used in organic agriculture and production systems, mainly as a cover crop, to improve the conditions of the soil and control weeds. 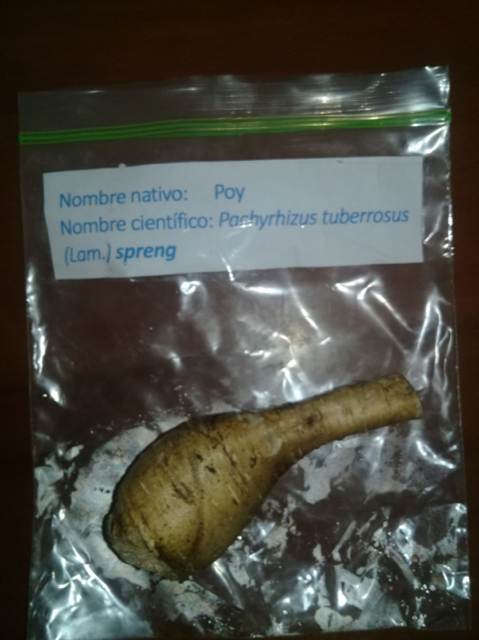 The Poy, the Tsogo impartial (Alocasia macrorhizos Don), the Shirina (Maranta ruiziana Korn), the Tsogo sanori (Alocasia sp.) and the Maonaniro (Dioscorea alata L.) surpass sweet potato, cassava and potato, between 2 to 7 times in fiber content in their composition. 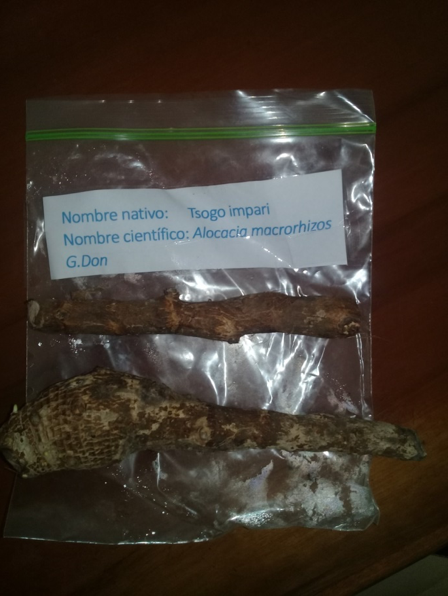 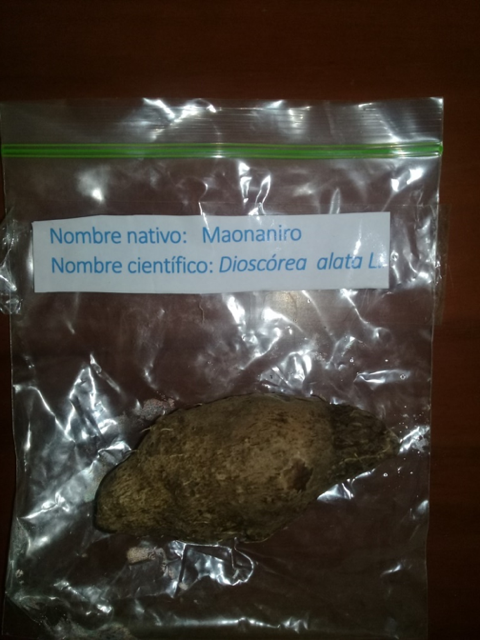 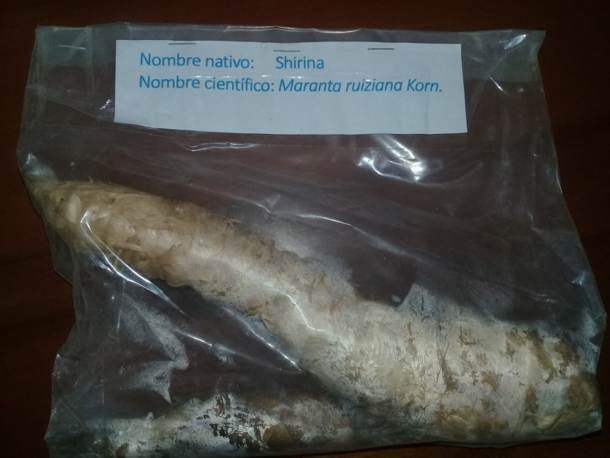 The important results of the analysis carried out on these five species of plants, rescued to re-incorporate them into the integral farms in the VRA, encourage us to continue in this line and determine the nutritional contribution of the species ancestrally consumed by these peoples. For 2019, we will do the same studies for another five species and we will release the results.

This experience is a great contribution that can be replicated in other communities and regions. In this way, we hope to contribute to reducing child malnutrition in native communities, revaluing and adapting the ancestral foods that were part of their diet for many centuries.