Forests in Peru: CEDIA's contributions for their protection and conservation - CEDIA

By: Rony Villanueva and Luis Trevejo

Peru has 73,973 million hectares of forests, ranking 9th worldwide and 2nd in South America in terms of forest area[1]This is thanks to the fact that more than half of the country's territory is covered with forest: 57.3% of the national territory. The wooded area in Peru is located in different proportions in the three regions, with a total of 42 types of forests[2]  grouped into three large blocks: dry forests (3.2%), Andean montane forests (0.2%) and humid forests (53.9%); covering a total of 57.3% of the national territory.

Forests fulfill very important functions on earth such as: maintaining water sources; regulate the climate; capture carbon; provide environmental services; and, mainly, they are sources of food, medicine, fuel, among others, for the living beings that we depend indirectly on them and on the populations that depend directly to carry out their socio-cultural activities.

In Peru, forests are threatened and have suffered a negative impact for many years, either due to human activities or the effects of nature. This is reflected in the high rate of deforestation and existing degradation, which, according to recent measurements made by the Ministry of Agriculture and the Ministry of the Environment, with the support of the Observations Room of the Organization of the Amazon Cooperation Treaty - ACTO , between the years 2001 - 2015, Peru has lost a total of 1,809,590 ha of forest, being the department of San Martín the one that lost the greatest amount of forest in that period (382,058 ha). According to the Peruvian Amazon Monitoring Project (MAAP) in its report #68, in 2017 an estimated 45,000 ha of forest was lost nationwide until August 17 of that year.[3]

Changes or alterations in the forest cover caused by deforestation and degradation have been generating sudden changes in temperature known as climate change. These changes that manifest themselves in different ways: droughts, floods, melting of glaciers, etc .; they affect the planet and its inhabitants.

To control and balance this accelerated process of deforestation of forests in Peru, there are initiatives by public and private institutions that seek to establish areas where both flora and fauna resources can be protected in their different conservation modalities -Protected Natural Areas -ANP, Regional Conservation Areas -ACR and Private Conservation Areas- ACP. Other means of indirect protection of forests (since their primary objective is protection are the peoples in isolation, but which have turned out to be extremely effective, are the Territorial Reserves-RT, Indigenous Reserves-RI and the recognition of the ancestral rights of communities native, riverine and peasant, by means of the legal physical sanitation of the communities that depend directly on the forest and constitute legitimate guardians of the resources of the flora and fauna existing in the forest.

Currently the National Service of Natural Protected Areas by the State - SERNANP contributes to the protection and conservation of flora and fauna in Peru with 19,456,485.59 ha, the Regional Conservation Areas with 2,838,491.47 ha and the Private Conservation Areas with 366,113.50 ha, adding a total of 22 633, 586.44 ha of protected natural areas in its different modalities[4].

Another of the mechanisms for the conservation and protection of flora and fauna in Peru is through the Territorial Reserves for the benefit of indigenous peoples in a situation of isolation or initial contact. These have been established according to Law No. 22175, where 2,400,000 ha[5]  in order to protect the integrity and give territorial security to the indigenous people who live in voluntary isolation.

With the legal physical sanitation of the communities, it also contributes to the conservation of the forests in Peru, because the communities that live in the forest and in the forest make adequate use of resources and are jealous guardians of their resources, since They are aware that the forest is their main pantry to be able to subsist and if it did not exist they would have no where to obtain resources so they would have to migrate to other places in search of them.

Until 2016, according to the study "Communal lands: more than preserving the past is ensuring the future"; carried out by the Territorio Seguros collective, it was recorded that there are 10,529 indigenous communities in Peru, of which 6,538 communities, peasant and native, are titled; adding a total of 36,214,163 ha in total.[6]

Support in the establishment and management of Protected Natural Areas

Support for the establishment of Indigenous and territorial Reserves

CEDIA is currently supporting 37 native and peasant communities located on the Napo, Putumayo, Curaray, Ucayali, Tapiche and Blanco rivers in the process of legal physical sanitation of their territories, adding a total of 411,725.24 ha., as well as with the management and establishment of 02 Proposals for Regional Conservation Areas, making a total of 376,789.20 ha.

Although there are these initiatives for the protection of forests in Peru, the rate of deforestation and forest degradation is increasing significantly due to the lack of good control in the application of Peruvian regulations in relation to the use of natural resources. means. Therefore, informality is the one that prevails at the national level in all sectors, where many of the employers ignore the regulations and there are officials who in one way or another lend themselves to cover these acts that go against the rules and the state of conservation of the forests.

Since its inception, CEDIA has been aware that by supporting communities in legal physical sanitation, it is also supporting the care and protection of forests. For this reason, our motto is: "One hectare of a community's titled forest is one hectare of conserved and protected forest." 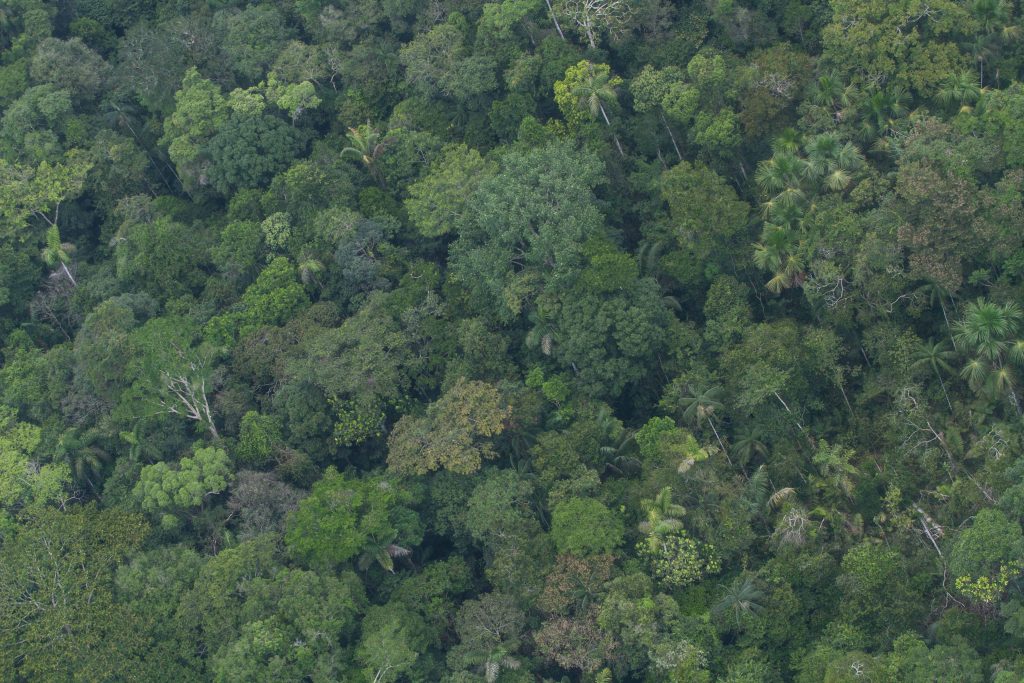 Overflight at the head of the Yaquerana River - Loreto