Forest Zoning (ZF) is a mandatory instrument[1] for the planning of forest heritage and wildlife. This allows to define the potentialities and delimitations for the direct or indirect use of the forest according to the current vegetation cover, the condition of the fragility of the ecosystems, the distribution of forest biodiversity and wild fauna, among others. It also provides quality technical information on forest lands so that the competent authority, and other entities, can make good management of forests in Peru.

In 2001, the Peruvian State approved through Ministerial Resolution the creation of the Permanent Production Forests (BPP). From its creation, the use of wood and other forest resources and wild fauna was made available to individuals. Thus, BPPs were created with an area of 24.5 million hectares[2] for the Amazon region (Ayacucho, Cusco, Huánuco, Loreto, Madre de Dios, Puno, San Martín, Loreto and Ucayali). For its part, Loreto had an area of 14 782 302 hectares[3] by BPP.

However, years later in Loreto, conflicts of real occupation of the territory became visible. This is basically related to the "overlapping" of land tenure between native communities, third party rights (private lands, concessionaires, among others) and Protected Natural Areas (ANP) at the national and regional level (Regional Conservation Areas - ACR) [4]. Only those who had the knowledge to claim their pre-existing rights (recognition and ownership), in order to achieve the redimensioning of the BPP in favor of those affected, were able to benefit from Law No. 27308 Forestry and Wildlife and its regulations.

As a result of this problem, resizing processes were started in Loreto, which were executed in different years (see Table N ° 1):

Table N ° 1: Superposition of the Permanent Production Forest of Loreto.

Thus, for 2013, the Loreto Forest Diagnosis allowed the identification of the land tenure area, through which it could be estimated that there were 9,992,953.20 million hectares (see Table N ° 2).

The overlap of BPPs continues to be a problem in many places in the Amazon. To this is added that the native communities that settled in territories prior to the BPP, currently cannot register with the Public Registries. The same happens with those native and peasant communities that still lack legal physical sanitation. It is in 2017[5], through Ministerial Resolution No. 0303-2017 published by the Ministry of Agriculture, which establishes the official area of BPP estimated for the region: 9,320,169.30 million hectares.

Currently, the Regional Government (GORE) of Loreto, in accordance with the regulations on zoning and forest management, has made the decision to improve forest and wildlife governance. For this, the zoning process began in 2016 (5 stages with 3 modules)[6] by modular approval. The preparation stage ended in 2017.

As of 2018, the process is in the Formulation Stage (2gives stage 1er module), culminating in the socialization process of the preliminary map of "Prioritized Ecosystems for Biodiversity Conservation - EPCB" in the provinces (public institutions, indigenous organizations, among others). This had as one of its inputs, the physical base of the Priority Sites for the Conservation of Loreto[7].

It is expected that, when these actions are finished, the Regional Management of Forestry and Wildlife Development - GERFOR, who leads the process, will present before the Technical Committee[8] progress and final EPCB map for validation and approval. Each of these stages has been developed in accordance with the Methodological Guide for Forest Zoning[9]. 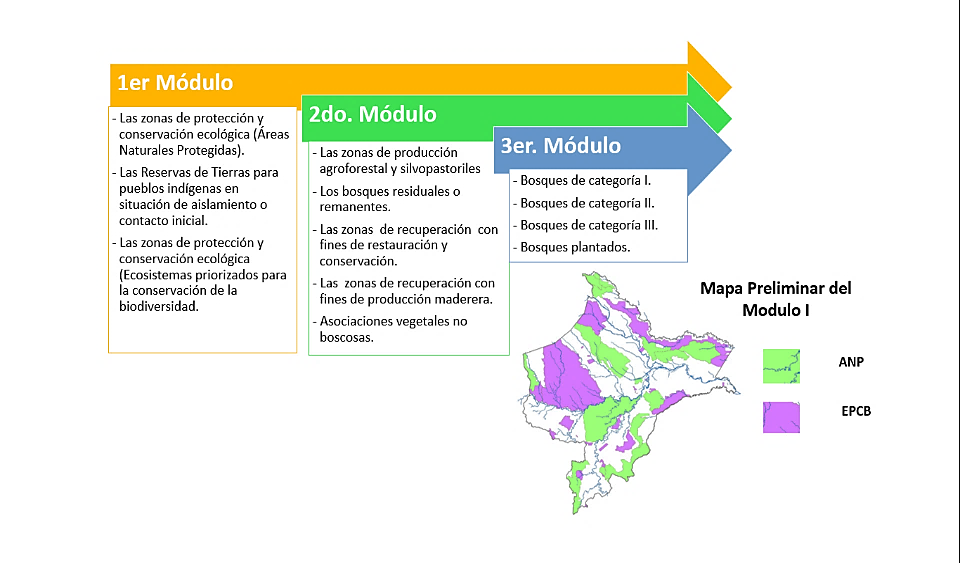 Once the ZF with its respective categories (3 modules) has been approved, the competent entities (Ministry of Agriculture and Irrigation - MINAGRI, Forest and Wildlife Service - SERFOR and Regional Forest and Wildlife Authority - ARFFS) will establish the Forest Management units[10], which will allow the lands of native and peasant communities, private properties, among others, to be recognized and incorporated automatically.

The Center for the Development of the Amazonian Indigenous (CEDIA) has been assisting and participating in the ZF process with the competent entities. This is due to the importance of the process, as well as the joint work that has been carried out with the indigenous communities that still have territories overlapping with the BPP. Added to this is the synergy established with GORE Loreto to collaborate technically and legally with the processes of establishing two proposals for Regional Conservation Areas: Aguas Calientes Maquia and Tapiche Blanco; which are currently considered as Priority Sites for the Conservation of Loreto and that need the ZF to determine the exclusion and resizing of the BPP so that they can continue with their establishment processes.

In this month, CEDIA will carry out the Diagnosis of the Tenure, Property and Use of the Land and Natural Resources of Loreto that will provide complete and updated information on the existing occupation or tenure (native and peasant communities, owners, concessionaires, among others). The diagnosis will serve as a basic input and will contribute to adequate decision-making by the competent authorities in the forest management and national land registry of the territory.

[2] INRENA and Roberto Kometter: Forest Mapification and Evaluation Working Document of the Permanent Production Forest in the department of Loreto, 2004.

[8] Regulation of the Forestry and Wildlife Law. Law No. 29763. Art.30 Technical Committee for Forest Zoning.