Loreto. The Loreto Regional Council approved by Regional Ordinance No. 031-2018-CRL, the Varillales Map of the Loreto Department. This map is an important territorial management tool that allows to know precisely the location of fragile and threatened ecosystems in the region for their conservation and sustainable management.

The Regional Ordinance recognizes the “Map of Varillales of the Loreto Department”, With an area of 457,439.69 hectares, distributed in two types of varillales: firm land of white sand and swamp, which together represent 1.22 % of the regional territory. 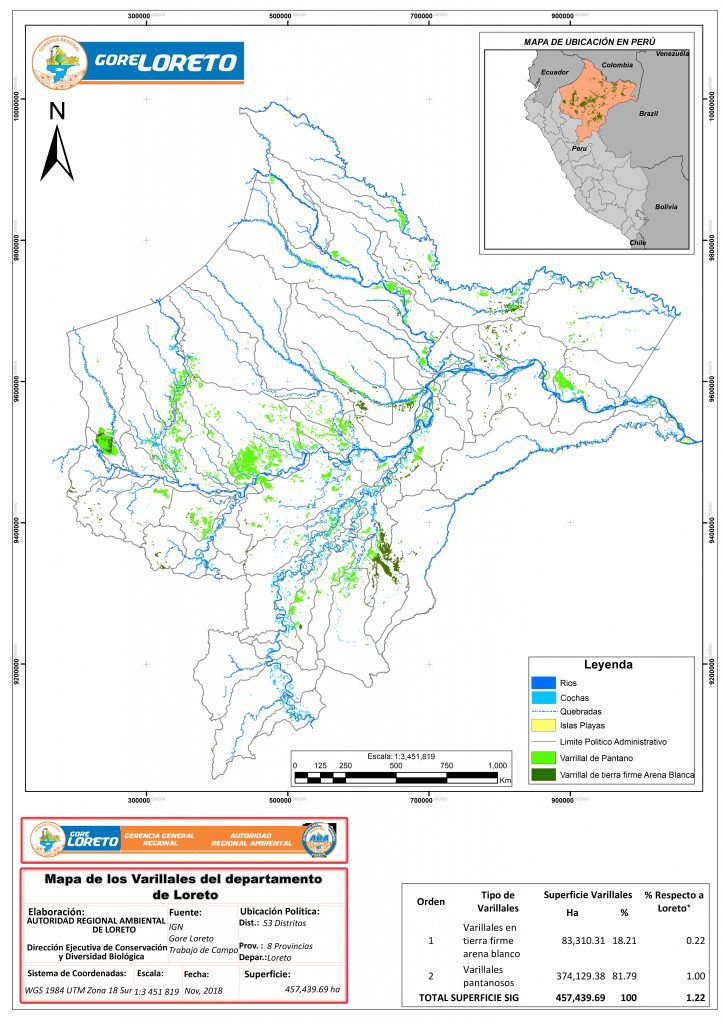 In addition, it recognizes the varillales of Loreto as representations of ecologically valuable and fragile territory, which meet relevant characteristics in the environmental, social and economic aspect, related to biological diversity (endemic and threatened species); in addition to being spaces with a high landscape value for tourism.

The promulgation of this ordinance will allow the information of the "Map of Varillales of the Loreto Department”, Its Descriptive Memory, as well as its Geographical Database, are part of the processes of design of regional public policies, land use planning and strategic planning, making these actions compatible in the implementation of the Regional Strategy for Biological Diversity of Loreto and its Action Plan to 2022.

The varillales correspond to a singular plant community due to their physical and biological characteristics, which give rise to a unique flora and fauna of Loreto; however, they are highly vulnerable to external activities such as deforestation. Therefore, the recognition of this instrument will allow the sum of efforts to guarantee the conservation of these spaces.

The construction of the Map of Varillales de Loreto began in 2015, when it was identified that forest concession areas were being promoted in the varillales area, which implied irreversible damage. Thus, bibliographic information produced in recent years was collected, cartographic and satellite data were collected, data was processed and analyzed, and layers of information were generated, which allowed the elaboration of this map.

Its realization is the result of an alliance between the Regional Environmental Authority (ARA), as the competent entity to implement environmental policies in Loreto; the Center for the Development of the Amazonian Indigenous - CEDIA, as technical support for the field work of the verification of these ecosystems and the Peruvian Amazon Research Institute - IIAP, as a specialist in the geographic information system.