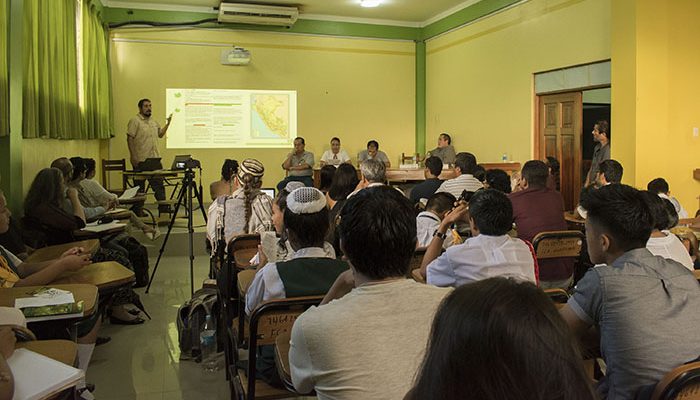 The Meeting of Researchers ended yesterday, as part of the activities prior to the VIII Panamazonic Social Forum (FOSPA) that opened today. As part of this, specialists from the Center for the Development of the Amazonian Indigenous (CEDIA) appeared at the last table held in the afternoon. This dealt with "Concrete alternatives for the preservation of the territory and the forest".

Dani Rivera, Director of Projects and Monitoring of CEDIA, presented his presentation entitled “From tax conservation to participatory conservation”. He pointed out that in the last century it was considered that effective nature conservation could only be achieved in the absence of human populations. This perspective generated conflicts, by displacing or limiting the populations traditionally established in places where Natural Protected Areas (ANP) have been created. He indicated that in the last 30 years alternatives have emerged that seek the mutual gain of conservationists and direct users of natural resources. This trend seeks to rescue traditional uses and offer local communities the benefits of good management and conservation of their natural resources.

He also mentioned the direct participation of CEDIA in the establishment of 9 ANP, indicated the cases of the Vilcabamba Complex and the Megantoni National Sanctuary, the Matsés National Reserve, the Gueppi Natural Areas Complex, the Sierra del Divisor National Park and the proposals of the Tapiche y Blanco Regional Conservation and Aguas Calientes. He stressed that the involvement of local populations has been decisive to achieve its establishment in all cases. He indicated lessons learned, such as that local populations must recognize their own interests; In doing so, they become true allies of conservation, forming real buffer zones and defending them from the impacts of activities that could degrade them. Furthermore, most of the benefits for local populations are difficult to perceive initially, as they are slow to materialize and can be diffuse. It may even take years for the long-term benefits to cover the immediate costs of these ventures.

Later, David Rivera, CEDIA Training Director, presented "" The link between Indigenous Peoples in Isolation and Protected Natural Areas ". He highlighted that the way in which the ANPs and Indigenous Reserves are established have never been the result of an exercise by the State for a sensible territorial ordering in the intention of planning the use of the territories, but largely respond to the requirement of indigenous organizations, native communities, organized civil society, NGOs, and even foreign pressure. This disinterest is evident in the budgets used to maintain these protective spaces.
Likewise, he indicated that currently a clear relationship between both categories of protection can be evidenced within the Amazon basin. The creation in times different from one to the other has led to the ANP's today being spaces of refuge and transit for peoples in isolation and that, together with native communities, have guaranteed some of the necessary conditions for the subsistence of these peoples. .

Among his proposals, he mentioned the need to propose a decentralized intermediate management space between the governing bodies, weaving together conservation interests with those of protection of the rights of PPII, with consensual procedures, participatory management instruments and defined regulatory mechanisms. As well as considering the creation of a category of protection of greater intangibility, such as a "Sanctuary of Life" where the relevance of the natural and cultural component of said space is considered, consolidating a protection and conservation block giving an integral meaning to said area. , eradicating extractive threats that violate its purposes.

Learn about the contributions of tables 1 and 2, in which CEDIA specialists also participated, on April 27 here.

These and other contributions generated in the Meeting of Researchers, and that are extremely important for the lives of indigenous peoples and the Amazon, will be included in the Final Declaration of the VIII Pan-Amazon Social Forum on May 1 of this year.