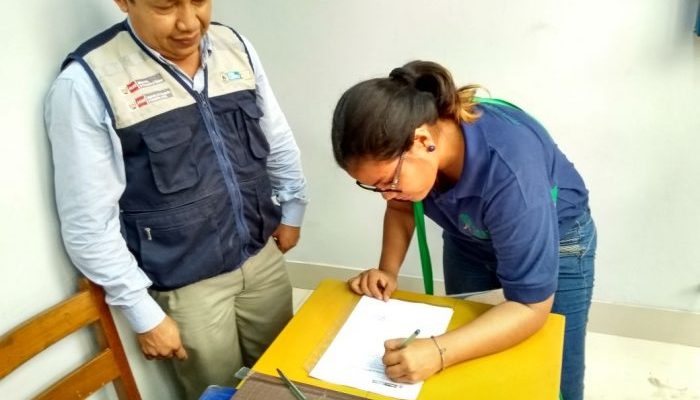 March 19, 2018.- On March 14, the Regional Directorate of Housing, Construction and Sanitation (DRVCS) of the Regional Government of Loreto delivered 122 units of the Mi Agua Kit to two communities that make up the Asociación Pueblos Cinco Unidos, through the Regional Director Eng. Maira Quispe and the Blgo Specialist. Otto Ríos. The Asociación Pueblos Cinco Unidos, located in the area of influence of the ACR Aguas Calientes Maquia proposal, is made up of the following communities: Alto Perillo, Nuevo Encanto de Suni, Nuevo Isla Baños, Monte de los Olivos and the Nuevo Canchahuaya Native Community . The delivery was made at the DRVCS facilities in the city of Iquitos, Loreto; a CEDIA specialist represented the communities in the handover.

The Mi Agua Kit consists of a domestic water treatment system for human consumption, which will be transferred and distributed over the next few days to 52 families from the Nuevo Isla Baños community and 70 families from Nuevo Encanto de Suni, in the province of Ucayali. , department of Loreto.
It should be noted that these steps are being developed within the framework of the implementation of the Life Plans of these communities. The Center for the Development of the Amazonian Indigenous (CEDIA) has supported the development of these management documents of the Asociación Pueblos Cinco Unidos since 2017.

Life plans reflect the needs and activities that communities must carry out in order to achieve a better quality of life. Likewise, thanks to the technical and financial support of CEDIA, and in close coordination with the Regional Environmental Authority (ARA) and the Regional Management of Indigenous Affairs (GRAI), the communities were able to present their life plans in February of this year to different authorities. local and regional of Loreto; Furthermore, they were able to meet with several of these authorities, such as the DRVCS, with whom they have reached agreements that will progressively begin to be implemented in favor of the quality of life and rights of the communities.