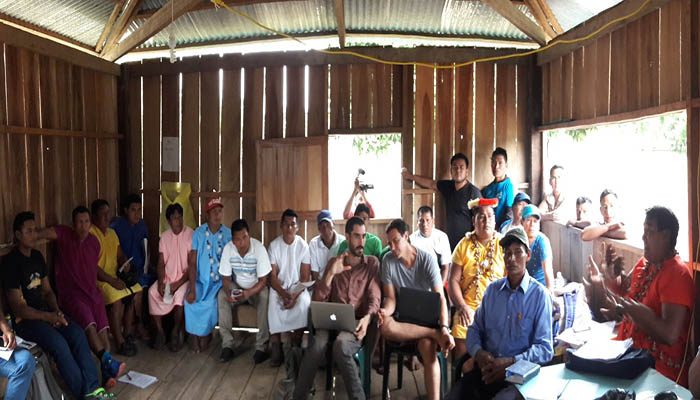 Last Saturday, September 16, the last revision of the Administration Contract of the Administration Contract Executor (ECA) Siekopai of the Communal Reserve (RC) Airo Pai was carried out. The meeting took place in the Bellavista Annex, which belongs to the Secoya San Martín de Porres native community, located on the Yubineto River, a tributary of the Putumayo River, Teniente Manuel Clavero District, Putumayo Province, in Loreto.

Eighteen representatives from four Secoya communities participated: San Martín, Mashunta, Zanbelín de Yaricaya and Vencedor-Guajoya - belonging to the Napo River basin. A representative from the Headquarters of RC Airo Pai, representatives of the Center for the Development of the Amazonian Indigenous (CEDIA), as well as Seibo community members of Ecuadorian nationality and the Institution Alianza Seibo also attended.

It is expected that, after the National Service of Protected Natural Areas (SERNANP) clears doubts from the community members, the Administration Contract will be signed at the end of this month or the beginning of the next. Subsequently, the ECA Siekopai will have 60 days to prepare its work plan, send it to SERNANP and, once approved, begin with the participatory management of RC Airo Pai.

The ECA Siekopai was established as a legal entity in August of this year through RD 041/2017-SERNANP-DGANP. CEDIA has provided technical and financial assistance to support the strengthening of ECA Siekopai within the framework of our project "Expansion of the Airo Pai Communal Reserve in the hyper-diverse Güeppi region of Peru."