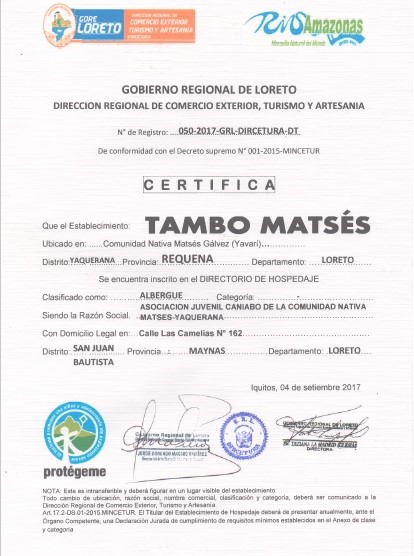 On September 4, the Regional Directorate of Foreign Trade, Tourism and Crafts (DIRCETURA), of the Regional Government of Loreto, officially registered the Tambos Matsés ecotourism lodge, located in the Matsés Native Community, the largest in Peru as it has more than half a million hectares. This hostel was an initiative of the CANIABO Youth Association, which is in charge of its current management.

Through said registration, the ecotourism and experiential community tourism activity has been legally recognized before the DICERTURA - Loreto through Registration No. 050-2017-GRL-DIRCETURA-DT. This is promoted by young Matsés who are members of the CANIABO Youth Association, which was recognized through Public Registries in 2002.

This Youth Association also promotes Matsés culture and environmental education so that the community's natural resources are conserved. It is made up of approximately 90 young people, between men and women between the ages of 15 and 30, and their mission is to develop ecotourism and community experiential tourism with the aim of taking advantage of natural resources in a sustainable way.